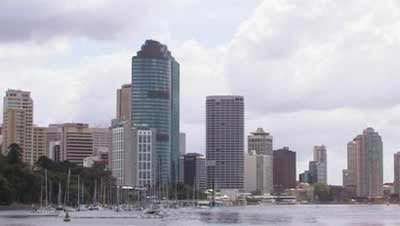 Since leaving the Isa, I have held a number of jobs and lived in a number of living accommodations. I firstly moved to Margate on the Redcliffe peninsula and shared a flat with Tracey, a girl from Mount Isa. I lived there, working in Brisbane as a door to door canvasser. I was selling "Early Learning Fun" kits. Basically, these toys would help kids learn while playing. I never got paid for any that I sold, and being young and naive, I never really worried about it. Looking back, those kits were worthless.

Then I moved to the south side of Brisbane to Dutton Park. I lived in the Dutton Park Guest House in Lindon St for a couple of months until my Dad got a tutor position at the Griffith University in Nathan, Brisbane. We lived in the West Residence, Australian Institute Of Sport, with sportsmen and sportswomen. None of this rubbed off on me though, I didn't take up any sport!

I met Alison while living at the Uni. I met her at a nightclub called Sibyls. I just happen to sit at this table at the club where a couple of very attractive ladies were sitting, and just said "Hi, I'm Jeff". Alison later told me that she just melted when I did that. We were together for about 14 months. Alison married Glen and now has 2 children. We remain friends, though rarely see each other. I think the last time I saw Alison was about 6 years ago. 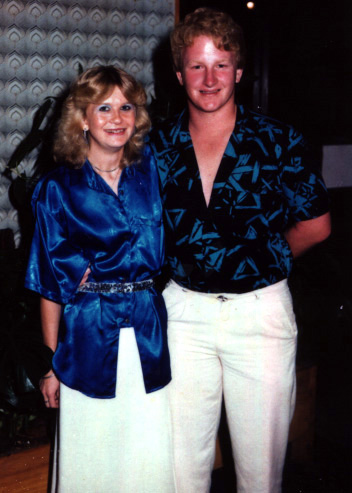 When Alison and I broke up, I was invited out to a movie with a lady named Dale. She informed me that a girlfriend of hers was also going. I first saw Diane standing next to Hungry Jacks in the Brisbane City Mall that night. I have to admit, I did think "Hellooo". Diane and I were an item for about 14 months. Of course, Diane and I broke up. Diane married John, whom I introduced her to. They have a son, Philip John (PJ) who I am Godfather for. Diane and John have also since broken up. I am friends to both of them, and not taking sides in their affairs as I do not want to lose their friendship. John, being my friend for about 14 years, and Diane means alot to me as we shared our lives for a short time. 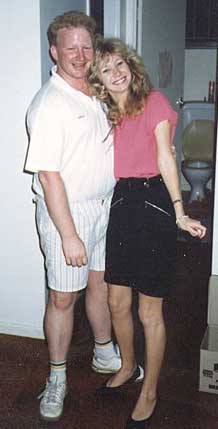 Then, in 1986, I got a job at Big Rooster (now Red Rooster) as a kitchenhand. 2 weeks later, I was promoted to Trainee Manager, about a week after that, I was 1st assistant manager. I kept this position for about 6 months. I had a sick day in September and when I got back to work, the area manager wanted to see me. He informed me that one of the other managers was sacked for smoking marijuana on the premises. He also informed me that I was being fired for the same thing. Now, I don't smoke... ANYTHING. When I told him that, he ignored it and fired me anyway. Once again, being 22, I never pursued this matter.

I also met Lorrae in 1986. Lorrae and I met at Sibyls as well. Lorrae introduced me to a world of music. Called "Import", this was a style of dance music I had never heard before. Artists like Mike Mareen, Ken Laszlo & Den Harrow, groups like Modern Talking, Baby's Gang and Fun Fun. Even to this day, I still play that music. Lorrae also introduced me to Chinese, Vietnamese and  Japanese food.

I got a job at James Hardies PTY LTD in Carole Park as a factory hand in May 1989. This was doing shift work on a 24 hour basis. It was hard to get used to, having lunch at 3am for one week out of every 3. It was here that I was trained for and received my forklift ticket. I drove Hyster 18 for a couple of years.

But, as usual, my love life was about to take a turn. Lorrae and I broke up and a couple of months later, I met Anna. We lived together for about a year, then in 1990, we just grew apart and went our separate ways. Anna is now married to Gordon and we don't speak much. Though, when we do, we can chat for hours.

Then along came Sandra. I was invited to a Christmas party by a friends sister. However, before the party, we decided to meet in person and just get to know each other a little. Sandra was working for Prudential Assurance at the time, so we met at her place of work after she finished for the day and went for coffee. We got along well and then went to the party.

Sandra and I were 2 different people though we discovered. So, after only a brief relationship, we separated. However, it was while I was with Sandra, that she saw that I had a knack for working on computers. Her comment one time "You have a knack with computers, why don't you do something about getting into the computer industry?" It wasn't until 1995, that I actually did this. But this, is on another page.

Since Sandra and I broke up, I went out with Melanie. Melanie and I parted on bad terms and I don't talk to her anymore. I would like to know how she is occasionally, know she is doing OK for herself. Lynette and I were engaged, but I couldn't handle being constantly accused of cheating when I never did, so I broke up with her in June 2001.

Now, I am still single and loving it. I have a large number of friends, some good friends, and only a few close friends. I hold my close ladies to my heart, and my close mates at a handshake distance!

Back to the main page.