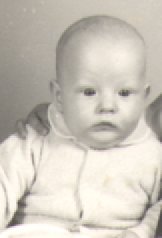 My first memory of life is an image of the side of the house in Akron, where i hid one of my dad's golf clubs. I remember this because we were having a "witch hunt" to find the club. I went to collect it, and it was gone. I also remember something about a Polaroid camera, this was talked about between a couple of kids while we were playing on the swing set in our back yard. I do not remember anything else from the USA.

In October, 1970, when I was 4, we drove from Akron to the west coast of the USA. It was here, on a beach in San Clemente, that I used my head to push some sand, and it burnt my scalp. It is this point in time, where my father says I "Fried my brains out on the beach at San Clemente". What is worse, I have this on video!

We boarded the Oriana, a ship bound for Sydney Australia. During this Pacific crossing, I have some vague recollection of someone, a child, being taught how to swim in the ships swimming pool. I was sitting on my Dad's shoulders watching this. I have NO idea who this was. About a month later, the ship docked in Circular Quay in Sydney. I remember the smell of rubber, like a pencil eraser.. Strange. We were only in Sydney for about 2 weeks so my Mom tells me, after which, we moved to Brisbane in Queensland.

We lived in Normanton Street, Stafford, a northern suburb of Brisbane where, in 1972, I started my schooling at Summerset Hills State School. I had to wait till '72 as I was only 4 at the start of '71 and could not start at that age. I was in the school playground one day when I dropped off the side of the slippery slide in the playground and broke my right arm, just above the elbow. I don't know why, but I spent a few days in the Royal Children's Hospital. I do remember that while I was in there, at one meal time, I had a pea on the handle of my fork and flicking it to the roof, where it stuck fast. The next thing I heard, was Dad's voice "Pick that up", I jumped.. My arm came out of plaster about 6 weeks after the break. Helping Mom wash clothes one day in her twin tub washing machine, I opened the spin drier and reached in to get the clothes out. Mental note: WAIT till the spinner STOPS spinning BEFORE reaching in! Broke my left arm just above the elbow. Sheesh, except for the hospital, I had to go through all that again! We met our new neighbors, Pat and Tom and their children, Pam, Steven, Carole and Sandra. We also met Link and Betty and their children Amy, Sandy and Kacey. They lived on the Gold Coast and we used to go down there almost every weekend. It was while in living in Stafford, that Mom and Dad separated. Being only about 5 or so, I didn't understand what was going on and just grew up with Dad living elsewhere, with my brother Tom.

Sometime in 1972, our Mom and Pat, from next door, developed an illness and were hospitalized. As our Dad's worked, Tom, Tracey, Pam, Steven and I were sent to live in a convalescent home in Sandgate. More on that story is here. 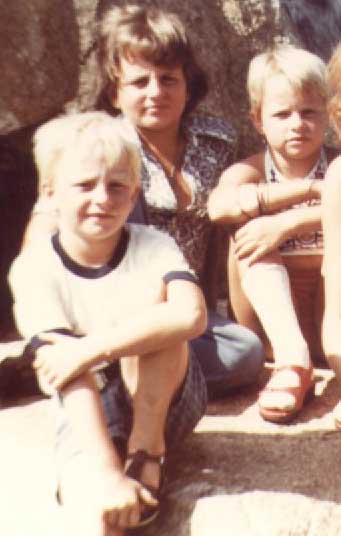 I believe this is around 1972, taken at the Roma Street park.

In about 1972, Bob came to Australia from Tennessee to be with my Mom. Mom, Tracey and I moved to Chapel Street, Nundah shortly after. I attended Nundah State School there and used to play in the park in our street. We lived in Chapel Street, in a flat above some shops. I remember Tracey and I trying to tame some kittens that were living in the roof drain of one of the shops. There was a drum of black.. something. I don't know if it was tar or paint. Must have been tar as it was WAY too thick to be paint. Anyway, either Tracey or I knocked this over and just left it. There is a photo of that somewhere. I think Mom took a picture of it just to remind us of what we used to get up to! In the park, there was an old canon, which was just setup as a plaything. We had our picture taken on it. 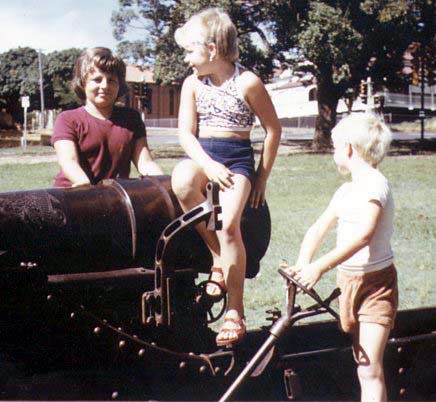 It must have been sometime in 1974 that we then moved to Ness Road in Salisbury, on Brisbane's south side. Our new neighbors included the Kiss family, the Johnson's and another family whose name escapes me right now. Here, I attended Salisbury State School in grades 3 and part of year 4. I made friends with some other kid named Justin. We used to "investigate" "things". One place was Water Holes Creek, Justin and I would play for hours, before going home all wet and muddy. We called it "investigating the creek". Well, we hoped our "learning the area" would help us not get into too much trouble. One of the biggest memories of this period, was the pulling down of the old "outhouse" in the back yard. This was a joint venture by all the kids in the area. Supervised of course by our parents. We spent the entire day ripping the boards off this box. The roof of it was under the house for what seemed like ages! We had some new neighbors move in just behind and to the left of our place. They had bought a dog with them from Yugoslavia, Whiskey. This dog seemed to move in with us. I remember him being given to us by the family as we were moving house. This time, we didn't just move house, we moved to the country.

To make reading this easier, go here for the country life.

Or go back to the main screen